BOBBY POWELL - I'M NOT GOING TO CRY OVER SPILLED MILK 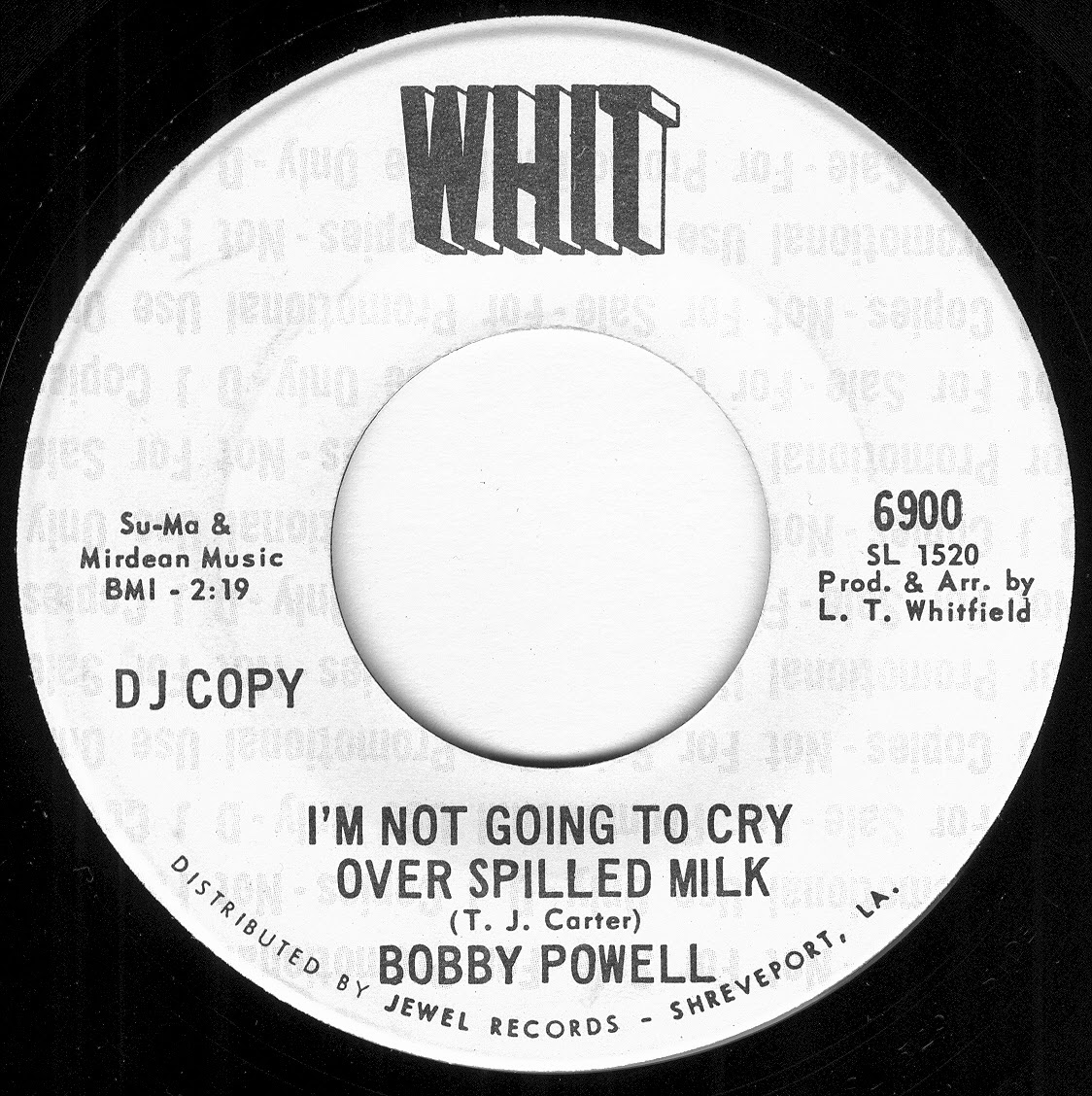 There is soul, and then there is SOUL. This is SOUL.

Most of the really great deep soul records of the 1960s were NOT made by Motown, Stax/Volt, or even the hallowed Atlantic label. The deepest ones were made on small southern labels by artists who played regionally, had one or two hits, and disappeared from the national eye. Dave Marsh (among others) calls these folks "journeyman" soul singers. A more apt name cannot be found. Like journeyman baseball players, they go from team to team (in this case, record label to record label), never becoming a superstar, never becoming well-known, but always dependable, always giving you your money's worth.

The blind singer-pianist Bobby Powell was probably the greatest soul singer out of Baton Rouge, Louisiana. Born there in 1941, he was playing piano and singing in the church by the time he was 6. Educated at the Southern University School for the Blind, he decided to pursue music as a career, namely gospel. He knocked around with a few local gospel groups (he may have cut a gospel 45 for the Cherokee label in 1959 credited to "Bobby Powell and The Glorylanders" - the record exists, but I don't have it, and can't confirm it's the same Bobby Powell), but, as always, money was the problem. So Bobby went secular, hooking up with local producer Lionel Whitfield. Whitfield had a small label of his own, Whit Records, and Bobby started cutting soul 45s there.

Powell's second 45 for Whit, "That Little Girl Of Mine", received some airplay in local markets, but  the B-side, Powell's version of the blues standard "See See Rider" (done by Powell as "C. C. Rider") took off in a big way. Whitfield's small label couldn't handle the demand, so the larger Jewel label - owned by Stan "The Record Man" Lewis - stepped in to distribute the record (but Whitfield was shrewd; he wouldn't sell Powell's contract to the larger label, and most of Powell's releases were still on Whit, including "C. C. Rider"). The record actually hit #1 on the Cash Box national R&B chart (though it only got as high as #12 on Billboard's R&B chart), and Bobby Powell was a national R&B star.

The ride didn't last long. The follow-up on Whit, the excellent "Do Something For Yourself", hit #39 on Billboard's R&B chart, but each successive record sold less and less. It also didn't help that Whitfield and Jewel terminated their distribution deal in late 1966, with the New Orleans-based Dover Records taking over (thereby guaranteeing poorer distribution).

The quality of Powell's records, however, never wavered. In 1967-1968, Powell put out killer sides like "Question", "I Care", and his version of The Staple Singers' "Why (Am I Treated So Bad)" (and its equally-excellent flip, "Thank You"). Unfortunately, few people outside the southeastern states heard them. To make things even worse, the Atlantic label was riding high with Clarence Carter, whose sound was VERY similar to Powell's.

Whitfield became dissatisfied with the job Dover was doing in getting Powell's records on the market, and called his old buddy Stan Lewis from Jewel Records to distribute Whit once again. Jewel wasn't interested, since they were doing very well distributing their own 45s on their Ronn and Paula labels, along with the Jewel label itself. However, Lewis reasoned, if Whitfield was interested in selling his label to Jewel, then he might do a deal. Whitfield sold (though he retained a percentage - again, shrewd) and the record featured here was the first issued under the new deal.

It absolutely AMAZES me that "I'm Not Going To Cry Over Spilled Milk" wasn't even a MINOR hit. It's simply one of the greatest soul ballads ever recorded. Powell's vocal alone is worth the price of admission, but the horns (which sound like the Memphis Horns, but probably aren't) really put this record over the top. Bobby's lover is leaving him, and he's gonna face the future like a man - whether it kills him or not. But he's DEFINITELY not gonna let her see him cry.

I used to play this one a lot on my radio show, and one day I received a phone call from Ron Delesner, he of the LiveNation ticket scam/empire. He told me he LOVED my show, thought I was the best soul DJ he'd ever heard, blah, blah, blah. He went on and on about some of the records I played, especially "I'm Not Going To Cry Over Spilled Milk", and said his good buddy Van Morrison was listening and really loved that one, too. Could I possibly make a CD of my best (obscure) soul tunes for him and for Van and send them to his office? Being young and stupid, I said "SURE!!". But I also saw an opportunity; I went to the "management" at WFDU-FM (I put quotes around the word because the only thing that those bozos "managed" to do was keep the top brass of Fairleigh Dickinson University at bay while they sat around their offices and did ABSOLUTELY NOTHING all day) and told them that RON DELESNER of LiveNation loved my show, and perhaps we could get some underwriting money out of him, since he's a fucking gazillionaire.

(Let me explain "underwriting": a commercial radio station charges money for advertisers to put commercials on their station; that's how radio stations make most of their money. In the world of college radio, however, commercials are not allowed. But, there is a loophole; advertisers ARE allowed to "underwrite" an hour of non-commercial programming, and in return they will have a 30-second spot played ONCE an hour, at the TOP of the hour, telling the audience about said underwriter. The underwriter can buy - sorry, "underwrite" - as many hours as it pleases, so you can hear the same spot once every hour. So, really, there's almost NO difference between "underwriting" and "commercials".)

"Management" told me to sit tight, and they'd write a formal letter to Mr. Delesner asking for underwriting consideration. I figured since they probably knew more about this than I did, I'd let them handle it. I gave them Ron's office address, and waited for the money to roll in to the station (since I certainly wasn't getting any of it).

Weeks passed. Nothing was done.

Meanwhile, I finished the CD and burned two copies of it. I called his office to confirm the address, and got Ron right away. He was warm, engaging, said he was looking forward to the CDs, and that I should call him if I needed anything. So I sent them - along with a letter asking him if he was interested in underwriting my little radio show (I had to take the bull by the horns at this point, because of the GREAT job that WFDU-FM "management" was doing in reaching out).

Well, I might as well have written "I HOPE YOUR MOTHER DIES OF CANCER" in the letter. I didn't hear back from Ron Delesner, and when I called his office a couple of weeks later, I was told he "wasn't in". I called again the next day, and was told the same thing. I called again a week later and was told that "Mr. Delesner will be out of the office for a few weeks, since he's hanging out on tour with Neil Young" (that sounds like a laugh-a-minute). I got the message; I never called again.

So, if Van Morrison decides to cut "I'm Not Going To Cry Over Spilled Milk", you know where he got the idea. I'd also say Ron Delesner owes me something, but what could he give me? Crappy tickets to one of the crappy artists he charges an arm and a leg (and then rapes you with a "service charge") for? No thanks. I'll sit here with my Bobby Powell 45s, which are better than ANY concert that Ron Delesner could promote.

To listen to more of this great soul singer, get his greatest hits here.


Posted by RichardSibello at 6:54 AM