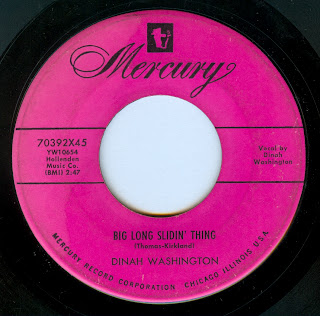 Ah, the double-entendre blues song.....one of my favorite sub-genres of music.  Strangely enough, it's also a long-lost form of music - most "dirty" blues records today simply hit you in the face with profanity - probably because we, as a society, have brought so many of life's seamier experiences to the forefront that almost nothing is shocking (or even titillating) anymore. But I'm not going to get into a whole indictment of the world we live in - let's just lament that they don't make records like this anymore, and leave it at that.

This record is from 1954 but the genre has been around as long as blues have been recorded (such as 1920s and 1930s classics "It's Tight Like That", "It Feels So Good", "She Squeezed My Lemon" and the incredible "Shave 'Em Dry"). This is definitely one of the best examples, right up there with The 5 Royales' "Laundromat Blues". Dinah Washington, the Queen Of The Blues, gets lowdown and dirty here like she rarely would again (by 1959, she'd had a huge pop hit with "What A Difference A Day Makes", and afterward rarely got back to her earthier, bluesier roots, though she was also a hell of a singer of standards).

Her story goes like this: she's been looking in every bar and honky-tonk in town looking for her man with "that big long slidin' thing". She meets a guitar player who tells her that she doesn't need her man - he's there for her. Then he took his guitar amp and "hitched it" in her "plug". After he "planked it and plunked it", she dumps him for not being "good enough". Then a knock comes on her door, and Piano Jack takes a shot at Dinah, telling her he wants to do some "tinklin' on her piano keys". Dinah's feeling nostalgic at this point, and she talks about why her man is so great - he thrills her because he "blows through here" and works his fingers and his thumb. Plus he slides it out and slides it in! Then, after he catches his breath, he slides it back again!

Of course, it's a trombone that he's doing all this with, but listening to Dinah sing, you KNOW that's not what she's talkin' about!

Please excuse the noise on this record - it's one of Dinah's rarer 45s and I've not been able to track down a cleaner copy.

Posted by RichardSibello at 5:31 PM