SHERIFF and THE RAVELS - SHOMBALOR 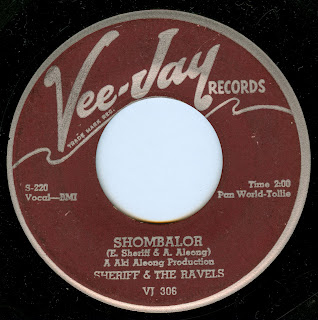 Greetings and salutations, all, and welcome to the first installment of my blog. Simply called "On The Record", it will be a weekly (or more frequent) review of records played on my radio show (WFDU-FM 89.1 on your dial, or at www.wfdu.fm), coincidentally (ok, maybe not) entitled "On The Record". Warning - over the years, I've become a crusty old man (and I'm only 41!!) with even crustier opinions. So if you don't like what I write in this space, you are more than welcome to comment - you may even change my mind about some things! Not likely, but you never know....

Anyway, this blog starts off with one of the weirdest, wildest, wackiest records I've ever heard - "Shombalor" by Sheriff and The Ravels from December, 1958. This and the Chips' "Rubber Biscuit" will live forever side-by-side as the two wildest (and finest) examples of doo-wop nonsense. It is also a prime example of why the record industry will never be vital again until it is taken over by people who actually like MUSIC you can go CRAZY to.

Apparently, The Ravels were a Brooklyn streetcorner group, just another of many hundreds of similar singing lads, looking for a shot at the big time (or at least a spin on Dr. Jive's show on WWRL). One of their acquaintances, a man named Elmore Sheriff, had a song he had written back in 1955 that he called "Shombalor". After doing some research (including a good article by Peter Stampfel of the Holy Modal Rounders - read it here), I found that this wacko tune was based on an old African work song. Anyway, Sheriff knew a guy named Aki Aleong, who was working as an actor and was heavy into the doo-wop scene (his 45 of "How Do I Stand With You?" on Mona-Lee Records is a VERY desirable slab of wax for group harmony freaks), and Aki had some contacts with some local recording studios. Result: The Ravels got their chance to cut a record. They immediately cut one of their original songs, "Lonely One" (written by one "W. Denson" - could this have been Wee Willie Denson, who later had the equally strange 45 "Fried Marbles"? Was he a member of The Ravels?) and for the flip side, ol' Sheriff let the group know that they were gonna cut his tune. The group got behind it, and made the record (this is why original copies on Vee Jay have "Sheriff and The Ravels" on one side and "The Ravels" on the other). Of course, not only did Aki Aleong take half the writers' credit for both sides, he got one of the EARLIEST production credits EVER for a rock and roll 45! Aki then shopped the tapes around to several labels, and Vee Jay Records in Chicago picked it up. Neither side was picked as a "plug side" (Vee Jay never printed "plug side" on their promotional 45s for some reason), but some DJs flipped over "Shombalor" - I have no evidence of this, but I am almost CERTAIN that someone like Mad Daddy in Cleveland or Dr. Jive in Harlem would have gleefully spun this on their shows.

Of course, the record never became a hit, but over the years it has consistently blown the minds of everyone who hears it. My girlfriend Jess absolutely HATES group harmony music, but can't get enough of this one. Even the doo-wop snobs I know love this record! And why not? It's got everything that make a record great - noise, atmosphere, simple melody you can sing along to (even if you can't decipher the lyrics, you can still join in with nonsense of your own), and - best of all - it ROCKS. I'd like to lock the heads of several record companies in a room with just a record player and this record - their heads would probably explode. And that would be a good thing. Who needs lame Disney-sponsored singers singing "keeping it positive" and "don't let anyone get you down, you are beautiful" lyrics over a horrid electric morass which is supposed to pass for melody, when you can turn this one ALL THE WAY UP and bug your square neighbors with some joyous, primal noise!!! On top of everything else, this record might (just might) have the first use of the F-bomb on a rock and roll record - listen carefully at about 25 seconds into it!

Posted by RichardSibello at 4:02 PM